Everything is now moved over to my new system, but I still need to update most of the internal links (links to pages within this site). So, if you click on something and you get a “not found” message, try using the Search box to find what you were trying to see. It will take some time, but eventually I should be able to catch them all.

So, yes, the Search feature works again. It’s been broken for some time, but now it’s much better than before, and fast, too.

The site design is totally new and not finished. It works, but I’d like it to look more like the old design. Currently it looks a bit empty and bare-bones for my taste. I’ll fix it, but I need to spend time getting my head wrapped around WordPress themes. The good thing about the new design is that it’s responsive, meaning that it changes itself to fit the device you’re using. So it works as well on a tiny smartphone screen as it does on a giant computer display.

Except for a few minor bits, everything from the old site is here. It’s rearranged a bit, but it shouldn’t be too hard to find your way around. Try the Search box if you get lost.

You may be wondering, does this mean I’m actively working on the site again? As you may recall, I put it on hiatus back in 2012. Although, I have posted a few news items since then. So, maybe.

I put all this work into moving the whole thing to Wordpress only because the thing I was using before was so old it was starting to break. My hosting service got it working for me, but put me on notice that I should probably to switch to something more modern soon. So I decided to bite the bullet and make the change while I still could. Either that, or the site would just stop working sooner or later.

As I went through every page of the site, it reminded me how much work I’d put into it in the past, and what an amazing phenomenon the National Lampoon was in its heyday. No promises, but I think I’m going to do a little fix up around here, maybe patch a few holes and finish the unfinished bits. My new blog system makes things pretty easy to work on now. Plus, the site will be twenty years old this May.

So, stay tuned. And sorry about those broken links. I’ll get to them.

I’m switching to a new back-end for the site, so some things, like the Issue listings, Radio Show listings, and so on, will be temporarily missing, or certain things won’t work right, like links to missing stuff. News and Answers are all here—including comments from the last ten plus years.

I hope to get everything up and running properly soon. Sorry for the inconvenience.

Drunk Stoned Brilliant Dead, the documentary film about the National Lampoon, is streaming on Netflix now! There doesn’t seem to be a way to link directly to the movie, so you’ll need to search “drunk stoned” to find it once you’re on Netflix.

It’s also been available on DVD and BluRay for almost a year, a fact I forgot to mention on my site before. But hey, the price now is about half what it was when it was first released last March. You’re welcome. 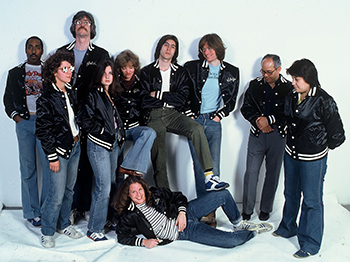 Barry Simon, who worked as an editorial designer at the magazine from 1979-81, sent me this photo of the art staff, taken just before he started working there. The photo was shot by Pedar Ness for an in-house ad for Black Sox jackets (remember those?). Pictured in the photo, from left to right, are Mark Gill (former manager of the mailroom and frequent model used in the magazine), Laurie Lenovitz (sister of Lisa Lenovitz and model used in several issues—not Maira Berman as previously stated), Art Associate John Schnakenberg (not confirmed), unidentified woman who worked in a support capacity, Susan Devins, Associate Art Director Lisa Lenovitz (lying on the floor), Design Director Peter Kleinman, Art Director Skip Johnston, “Sam the Stat Man”, and an unidentified woman who worked in accounting. (Thanks to Peter Kleinman for corrections. If anyone reading this knows the identity of unidentified people in this photo, drop me a line.)

Tony Hendra, who, for the last few years has been presiding over a satirical website called The Final Edition, is releasing a new National Lampoon album, the first in 35 years. You can read more about it here. Could be good.

Josh Karp’s 2006 book, A Futile and Stupid Gesture: How Doug Kenney and National Lampoon Changed Comedy Forever, is being made into a movie, with Will Forte as Kenney. Others in the cast are Domhnall Gleeson as Henry Beard, Matt Walsh as Matty Simmons, Seth Green as Christopher Guest, Rick Gassman as Harold Ramis, Jon Daly as Bill Murray, Joel McHale as Chevy Chase, Thomas Lennon as Michael O’Donoghue, Natasha Lyonne as Ann Beatts, and Josh Gemberling as John Belushi. Martin Mull will also play Kenney, but as an imagined older “modern Doug” (the real Doug Kenney died in 1980). The film is being produced for Netflix. Shooting is beginning this month and the film will be out in 2017. More info here.

The panel discussion about National Lampoon from Wednesday, featuring Rick Meyerowitz, Peter Kleinman, and Tony Hendra, was captured on video and can be viewed here. Update: Unfortunately, it appears that the video has been removed.

Former NatLamp art director Michael Gross died at his home in Oceanside, California today at the age of 70. Michael is one of my heroes, and a big part of why I created this site nearly 20 years ago. Because of this site, I was in contact with him from time to time over the last ten years or so. The last time was about a month ago when he sent me a link to the video about an award he got (see below). See also his obit in the New York Times. Also, lots of tributes on Michael’s Facebook page.

The American Bystander is a new quarterly humor magazine being launched on Kickstarter. (If you don’t know what Kickstarter is, it’s a way for people, like maybe you, to help back new creative ventures. It’s sort of like public tv for artists, writers, and other creative types.)

Many of the folks behind The American Bystander are former Lampoon writers and artists, such as Brian McConnachie (who will be editor-in-chief), Ellis Weiner, Mike Reiss (also known for The Simpsons), Ron Barrett, Jack Ziegler, John Caldwell, Roz Chast, Robert Grossman, Frank Springer, Edward Sorel, R.O. Blechman, Mimi Pond, B.K. Taylor, and M.K. Brown. Other contributors are coming from SNL, The Simpsons, and Monty Python. It’ll be like a comedy all-star supergroup. Full disclosure: I designed the logo, so I’m kind of involved, too.

I think it’s going to be amazing, and it looks like they are well on the way to being funded.

A comedy mind is a terrible thing to waste. Won’t you help?