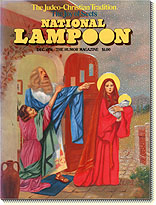 [No cover description this issue. Cover depicts the Virgin Mary and baby Jesus being thrown out by her father.] Illustration by Mara McAfee.

The Goyspiel According to Bernie, By Gerald Sussman; Photograph by Jack Wallach

A Child’s Christmas in Ulster, By Sean Kelly; Illustrations by Randall Enos

The Fatima Letter, By Doug Kenney

Denominational Hells, By P. J. O’Rourke; Illustrations by Warren Sattler, and others uncredited