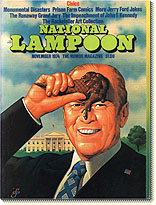 “COVER: The official National Lampoon portrait of the thirty-eighth President of the United States, by Don Ivan Punchatz.”

Watergate Down, By Sean Kelly; Illustration by Steve Walker

The Marketplace of Ideas: A Shopper’s Guide, By Richard Helfer

Should You Play Dirty Tricks?, By Chris Miller; Illustration by Larry Ross