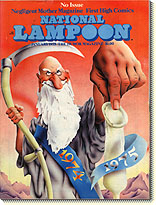 “COVER: This month’s cover is by Robert Grossman, one terrific fellow and a hell of a good artist, who, for tax purposes, would sooner not have it known that because the January issue goes to press in November, he was paid during fiscal year 1974.”

Night of the Iceless Capades, By Ed Bluestone; Illustrated by Hama and Reese

Frogs Fly over the Rainbow, By P. J. O’Rourke; Illustrations by Wayne McGloughlin and others uncredited

Negligent Mother Magazine, By Brian McConnachie; Photographs by Phil Koenig and others uncredited