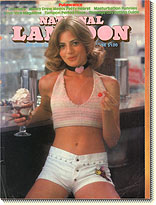 “COVER: The usual fuck-ups. Hendra, Kelly, and McConnachie thought the original model looked too old, so we* reshot with the very lovely young lady you see before you. Or would see if you were’t wasting your valuable time (and mine) reading this. Also, the Editors would like to thank the very lovely people who helped make this cover possible, including Michael Stevens of Superhair (hairstyling), Laura Singer and Marjorie (stylists), the Liberty Ice Cream Concern (43 W. 63rd, next door to The Ginger Man), Chris Callis (photographer), and Vincent Nasso (makeup).”

*2018 Update: The cover description starts on page 17 (ending at “…looked to old, so we”) and continues on page 84. However, many copies of this issue (including all the ones I have seen before now) instead have a full-page ad on page 84. I originally thought this was an intentional joke and included only the abbreviated description here for the last twenty years. I discovered recently that not all copies were printed this way, and that some do have the missing page, including the rest of the descriptive text as well as the rest of the Letters From the Editors column, which also continues on page 84. My guess is that the full page ad was a last minute addition or accidentally left out, and that running the ad was more important than the stuff that was originally supposed to appear on page 84, important enough that they changed the page in the middle of the print run. I suspect that not many issues with the original version of page 84 where printed.

The Girls Room, By Chris Miller; Illustrated by Tommy Soloski

Nancy Drew and the Case of the Missing Heiress, By Doug Kenney; Illustration by R. Kursar

The Night of the Seven Fires, By Chris Miller; Illustration by Melinda Bordelon

Trots and Bonnie, Written and illustrated by Shary Flenniken