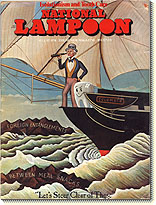 [No cover blurb this issue. The cover illustration allegorically depicts Uncle Sam and Mr. Tooth sailing a ship labeled “Columbia” between rocks labeled “Foreign Entanglements” and “Between Meal Snacks” with the caption, “Let’s Steer Clear of These.”] Cover illustration by Richard Hess.

Editorial, Uncredited; Cartoon by B. Kliban

Our Bodies and None of Your Business, By Doug Kenney and P. J. O’Rourke; Photographs by Ronald G. Harris, and others uncredited

Underwear for the Deaf, By Michael O’Donoghue; Graphics by Alan Rose; Photographs by David Kaestle

Mouthing Off, By Brian McConnachie; Photographs by Dick Frank

Frying Down to Rio, By Gerald Sussman; Photograph uncredited