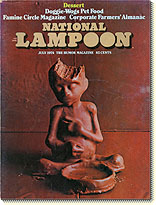 “COVER: This most delectable cover was most assuredly photographized by the right honorable Mr. Dick Frank and was sculpurized by the excellent hand of our illustrious art director, Mr. Michael Gross, oh yes indeed.” [The image is taken from the photo from the cover of George Harrison’s “Concert for Bangladesh” album, but done in chocolate.]

Guns and Sandwiches Magazine, By Brian McConnachie; Photographs by Vince Aiosa, and others uncredited

A Thanksgiving Memory, By Chris Miller; Illustration by Melinda Bordelon

The Corporate Farmer’s 1974 Almanac, By Christopher Cerf and Henry Beard; Illustrations by Randall Enos, and others uncredited

The Intergalactic Gourmet, Written and illustrated by Ed Subitzky