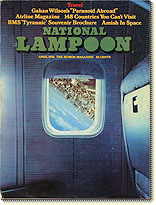 “COVER: This month’s Kodak caper was snapped by photographer Ronald G. Harris, moving at 425 mph at about 2400 feet. He was a great guy.” [The photo is from the point of view of a passenger on jet airliner.]

The Paranoid Abroad, Written and illustrated by Gahan Wilson

The New York Cabby’s Guide to New York, By Gerald Sussman; Photographs by Ann Staton and others uncredited

Festivals of the World, By Dean Christopher

Amish in Space, By Brian McConnachie; Illustrated by Russ Heath

License Plates of the U.S.A., Uncredited

Motoring in Rurethenia, By Bruce McCall; Illustration by Melinda Bordelon

All That’s Wrong with the World on One Clear Chart, By Richard Helfer