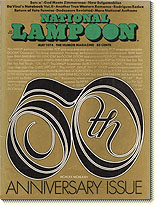 [No cover blurb this issue. Not even a lettering credit. Could be Michael Doret.]

My Own Stamp Album–Continued, Written and illustrated by Bruce McCall

8 Comics in One!, Cartoon by Ed Subitzky

Americans United to Beat the Dutch, By Christopher Cerf and Henry Beard; Illustrations by Warren Sattler and Don Perlin

Underwear for the Deaf, By Michael O’Donoghue; Graphics by Alan Rose; Photographs by David Kaestle

Return of the Dodosaurs, Written and illustrated by Rick Meyerowitz