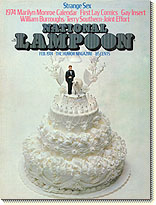 “COVER: This month’s cover was conceived—whoops, dirty word—and executed—that’s more like it—by Art Director David Kaestle, which tends to disprove the contention of zoologists the world over that art directors have no sense of humor. More importantly, the cover contains a price increase, and this merits a word of explanation. Our nation is, as you know, afflicted with an acute humor shortage. This shortage has led to an inevitable decision on our part, namely, whether to ration our existing supplies of humor or whether to tax them at a higher rate. After much deliberation, we have decided that rationing would be far too fair to the poor and are therefore applying a 12 percent increase in the ‘gas’ tax normally levied on magazines of our category. We would like to reiterate as we have before the Senate Judiciary Subcommittee on Comedy Abuses that we are not hoarding our supplies of humor, that we have not allowed ourselves to become increasingly dependent on imported, particularly European, sources of humor.” [The cover shows a wedding cake topped with figures of a man and a sheep.]

Strange Sex We Have Known, By William S. Burroughs and Terry Southern

Boxed In, By Chris Miller; Illustration by Melinda Bordelon

Whiffers and Cooties and Lungers on Strings, By Doug Kenney; Photograph by Dick Frank

Saturday Nite on Antarius!, Written and illustrated by Ed Subitzky

Funny Pages, Featuring “Nuts” by Gahan Wilson; “Cheech Wizard” by Vaughn Bodé; “Idyl” by Jeff Jones; “Trots and Bonnie” by Shary Flenniken; “Chicken Gutz” by Randall Enos; “A Glass of Beer with Stanley” by Rodrigues; and “One Year Affair” (one episode) by Ralph Reese and Byron Preiss