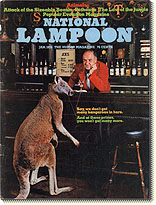 “COVER: Photograph by Dick Frank. Kangaroo (Skippy) by Animal Talent Scout. Skippy is a sweetheart. Terrific beast, tame, completely unexcitable. Nothing bothers him. People, noise, bright strobe lights. Nothing. Well, one thing. Skippy doesn’t like bars. Skippy also has a service for five of steak knives on the end of those cute paws and a pair of anvils where most furry animals have feet. Sheesh. The things we go through to separate you from your mazuma.” [The caption on the cover reads, “(Man:) Say, we don’t get many kangaroos in here. (Kangaroo:) And at these prices, you won’t get many more.”]

Attack of the Sizeable Beasts, By Brian McConnachie; Illustrated by Fran Hollidge

Law of the Jungle, By Henry Beard and John Weidman; Illustration by Tommy Soloski