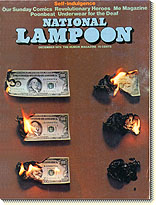 [No cover description to excerpt. In case you can’t make it out, it’s a $100 bill burning.] Photograph by Dick Frank.

When It Comes to Revolution…, By P. J. O’Rourke and Sean Kelly; Photographs uncredited; Illustration by Randall Enos

How I Spent My Summer, Written and illustrated by Ed Subitzky; Photograph uncredited

Practical Jokes for the Rich, By Henry Beard; Photographs by Vince Aiosa

Me Magazine, By Henry Beard and Gerald Sussman; Photographs uncredited

Funny Pages, Featuring “Nuts” by Gahan Wilson; “Idyl” by Jeff Jones; “One Year Affair” (three episodes) by Ralph Reese and Byron Preiss; “Chicken Gutz” by Randall Enos; “Dirty Duck” by Bobby London; “The Ax-murderer and the Ladybug Fetishist and the Stripper and the Male Prostitute’s Mother!” by Ed Subitzky; “Trots and Bonnie” by Shary Flenniken; and “The Aesop Brothers, Siamese Twins” by Rodrigues