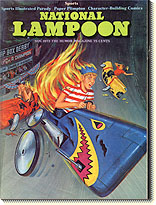 “COVER: This month’s cover is by Bob Swanson, whose son attends Duke University and is an avid reader of National Lampoon. OK, Swanson Jr., let’s get all those Wolverines at Duke to buy tons of magazines and make your dad famous! He’s worked long and hard to send you through college. The least you can do is get out there and hawk a few Nat Lamps!”