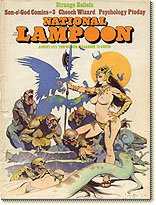 “COVER: Frank Frazetta’s cover illustration arrived too late for our Tits ‘n’ Lizards issue, but we thought we’d use it here, especially since the polaroids of me healing Ann-Margret with a laying on of hands turned out smudgy.”

Strange Beliefs of Children, Written and illustrated by Gahan Wilson

Fuzz Against Bunk, By Akbar Del Piombo; Collages by Rubington