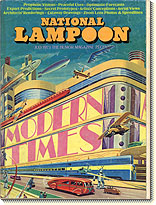 “COVER: This month’s cover (see cover) was painted by writer Bruce McCall. There is no satisfactory explanation for this. Mr. McCall wonders if anyone notices that the aircraft in the upper left corner of his painting is a Grumman ‘Skyrocket.’ He reports that Autogyro is actually spelled Autogiro, and was invented by a Spaniard. He is interested in raising the Titanic. He lives alone.”

The Father of the Transistor, By Michael O’Donoghue; Illustrated by Bob Monhegan