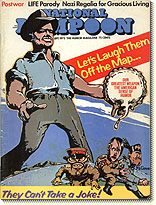 “COVER: This month’s cover is by Michael Gross. Frankly, when it came in I thought it was a stiff, but Michael redid the guy’s head, put a hat on him, and now it’s better. A little Balkan if you know what I mean, but better. Michael Gross, by the way, didn’t invite me to his party.” [The cover is a parody of WWII American propaganda posters. It shows Tojo, Hitler, and Mussolini fleeing from a cream pie-weilding average American citizen.]

Flowers from the Front: An Anthology of War Poems, By Sean Kelly; Illustration by Alan Rose

Rendezvous with Discomfort: One P.O.W.’s Story, By Doug Kenney