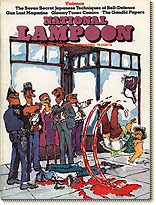 “COVER: This month’s cover is by Charles Rodrigues. Rodrigues is the author of Great Expectations and The Mayor of Casterbridge, and has received the Nobel Prize in Physics for his pioneering work in the use of lens prismatics in the collimation of nondiscrete ions. He currently makes his home in Jakarta, where he takes time off whenever he can from his busy schedule as President of Indonesia to go riding on one of his prize unicorns or work on a few new entries to his dictionary of the dolphin language.”

The Gandhi Papers, By Gerald Sussman; Illustration by Melinda Bordelon

How Many Nice Things Can You Find In This Chuckle-Choked Puzzle-Picture Picture-Puzzle?, Written and illustrated by Bruce McCall

Is It Still “Playing” Post Office When the Mucilage Is Real and Covers Your Tongue?, By Chris Miller; Illustration uncredited

Special Message to Chiefs of Police and Heads of Law-Enforcement Agencies from the Attorney General of the United States, the Honorable Richard G. Kleindienst, By Henry Beard; Illustrations by Gray Morrow