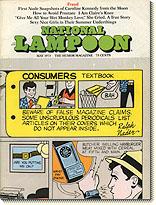 “COVER: Warren Sattler does it again. That’s two out of two.” [Ralph Nader as Dick Tracy.]

In Search of the “Midnight Tape”, By Michael O’Donoghue

You Can’t Believe Your Eyes!, By Bill Effros; Illustrations by Ivan Lacher

The Curse of the Mandarin, Written and illustrated by Gahan Wilson

A Legal Way to Buy into the Booming Gold Market, Cartoons by B. Kliban

The Funniest Cartoon in the World, By Bill Woodman

The Tip, By Michael O’Donoghue