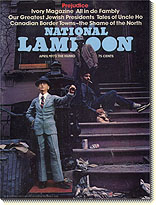 “COVER: Yet another in the National Lampoon‘s distinguished Salute to Popular Magazine Cover-Styles series. this is number 6, ‘Psychology Today: the Stupid Surrealistic Switch Illustrating Some Pointless Aspect of Race Relations.’ Photographed by David Kaestle.” [The cover shows a white “lawn jockey” figure outside a tenement building in a black ghetto.]

The Joys, etc., of Yiddish, By Gerald Sussman; Illustration by Stan Mack

All in de Fambly, By Chris Miller and Marc Rubin; Illustration by Melinda Bordelon

Would You Want Your Daughter to Marry One?, Cartoons by Rodrigues

The Shame of the North, Written and illustrated by Bruce McCall