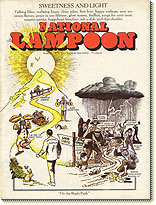 “COVER: Copping two 4s, and 3, and a 2 from a bunch of goddamn Commie judges from Bulgaria, this flawless Assisted Last-Minute Idea Executed from a Sitting Position (degree of difficulty of 10) still gets Warren Sattler, three-time American Artistic Association Felt-tip Pentathlon chapmion, a prestigious Steel Medal for the good old USA.”

Angels in Crewcuts, By Brian McConnachie; Illustration by Howard Darden

My Own Stamp Album, Written and illustrated by Bruce McCall

The Happy Ending, Written and illustrated by Edward Gorey

Stuff to Make Playing With Your Food Even More Fun Than It Already Is, By Michael O’Donoghue; Illustrated by Mark Rubin and John Clarke