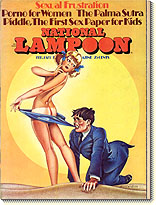 “LAST MONTH’S COVER: Remember it? …The dog that was going to be killed if you didn’t buy the issue? You people are really incredible. You had us kill that sweet pooch. And don’t for a minute go blaming us. The choice was yours entirely. We held the gun, but you sure as hell pulled the trigger …though there are those among you who did buy three and four issues to take up whatever slack existed. Those people are to be commended. But it wasn’t enough. It was for everyone to pull his and her share. And you didn’t. We are really overwhelmed by what little regard you hold for life. You should be ashamed of yourselves. And be punished. Outside of the edirial you had to read to get to this paragraph, we couldn’t think of anything suitable. If, by some chance, you didn’t read the editorial, go back and read it. Three times. No, four times. It’s hardly punishment enough, but it’ll have to do for the time being. And if the day ever comes when we have all become policemen, and you are being held hostage by crazed killers who have their guns aimed right at your semicircular canals and are yelling to us to throw down our guns or you’ll be chasing your frontal lobes down Sunny Goodge Street, we’ll remenber what you did to that dog. Just remember that.

“COVER: This cover is further punishment for having us kill the dog on last month’s cover.”

[The cover illustration, by David Willardson, is a parody of the old Coppertone ad in which a small dog reveals the untanned bottom of a young girl. Except that the girl isn’t so young and the dog is a guy.]

The Kind Men Like, By Michael O’Donoghue; Illustrations by Malcom and Nancy Fowler