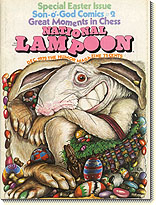 “COVER: This month’s cover is by Rick Meyerowitz and is entitled ‘The Old Switcheroo Lives, But Can We Make a T-Shirt Out of It?’ One might make the observation that if that bunny rabbit is really crammed into the cover as it appears, why then is the logo dropping down instead of being forced up as physics would dictate? Our Design Director Michael Gross explains: ‘Yeah, well, maybe so, but bunny rabbits don’t have lumps on the tops of their heads. If they had lumps on the tops, we could force the logo up; but they don’t, so it’s got to go down.”

The Golden, Wonderful Treasure of the Most Expensive Christmas Giftbooks of All Time, By Gerry Sussman; Photograph uncredited

Inventions That Never Made It, Uncredited

The Gift of the Magi, By Chris Miller; Photograph by Ronald G. Harris

A Christmas Tale, By Arnold Roth

TV Shows My Network Would Run, By Ed Bluestone; Photograph by Bruce Bacon

Up the Erse to Ulster!, By P. J. O’Rourke; Illustration by Gerry Gersten, Photographs uncredited

National Anthems of Our Political Friends, By Brian McConnachie; Illustration by Randall Enos

Funny Pages, Featuring “Nuts” by Gahan Wilson; “Trots and Bonnie” by Shary Flenniken; “Do-It-Yourself Comics!” by Ed Subitzky; “Idyl” by Jeff Jones; “Earl D. Porker, Social Worker” and “Bill–The Story of a Newt Who Was Eaten by His Suit” by M. K. Brown; “Dirty Duck” by Bobby London; “Chicken Gutz” and an untitled strip by Randall Enos; and “Vinny Shinblind, the Invisible Sex Maniac” by Susan Harris and Peter Bramley