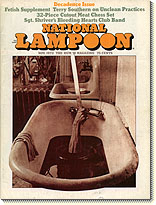 “COVER: This month’s cover is entitled ‘The Lady of the Bathwater’ and was photographed by Steve Meyers. By now the astute reader is probably wondering, ‘If this, as it would certainly appear to be, is intended as an off-the-wall parody of Sir Walter Scott’s Lady of the Lake, then why the fuck is a man’s hand holding the sword?’ The explanation is simple. Michael O’Donoghue, who came up with the idea, turned the entire project over to Art Director Michael Gross. O’Donoghue didn’t bother to go over every detail with Gross because he figured any schoolboy has read King Arthur, not realizing that Gross, who’s still trying to finsh a Blackhawk comic he bagan some months ago, thinks that King Arthur is a seaport in Texas. When he saw the cover, O’Donoghue, always considerate of other’s feelings, slow to condemn and quick to forgive, just didn’t have the heart to tell Gross that his is a stupid, illiterate, cloddish, defective, imbecilic, retarded, dense, moronic, subnormal, feeble-minded dolt who’s about as bright as a night-light and as sharp as a napkin. Your brain belongs in Forest Lawn, you beef-witted dumbhead!!!

How to Talk Dirty in Esperanto, By Kichard Bonker and Henry Beard; Illustrated by Bruce Cochran

The Remnants of Dignity, By Ed Bluestone; Illustrated by Frank Springer

The Iliad and the Ecstasy, By P. J. O’Rourke; Photographs uncredited