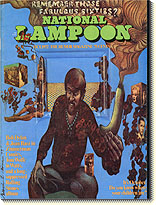 “COVER: The exact meaning of this month’s cover is unclear, but if you play it backwards, there are some interesting hints about Paul. Its title is: ‘It’s Going to Be the Very Next Craze’ (see above). It was painted by Gilbert Stone, who did the latest Band album jacket, which makes him okay with us, because we’re all into album jackets (see above).” [The cover, in a rather halucinatory style, shows a young hipster passing the viewer a smoldering banana. In case you are too young to get the joke, during the sixties there was a widespread false rumor that smoking banana skins would get you high.—MS]

OD, The Game of Drug Abuse, By Michael O’Donoghue and Anne Beatts; Illustration by Mari Kaestle

The Ventures of Zimmerman, By Tony Hendra and Sean Kelly; Illustrated by Neal Adams. To Honor a Decade of Dissent, By Cindy Laverty

See Me, Deal Me, Clutch Me, Steal Me, By Alan Coren; Illustration uncredited

Where the Weird Things Are, By Michael O’Donoghue; Illustration by Wally Neibart

The Assassination of Vaugh Meader, Written and illustrated by Neke Carson

An Afternoon on St. Mark’s Place Sometime Late in the 1960s, By P. J. O’Rourke; Illustration by Randall Enos

Come for Your Life, By Chris Miller; Illustration by Melinda Bordelon

Underneath the Underground, By John Glashan