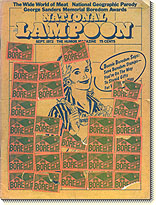 “COVER: This month’s cover was developed by Michael Doret and Charles White III. Mike and Charlie (both have a great sense of humor, by the way) have been partners for years, and have been in an out of just about everything. They began on Seventh Avenue designing table linens, tried marketing Hearts of Palm Frozen Pie in the ghetto, and last year had a VISTA grant to teach junkies how to dance. We stole them away from a prominent massage parlor and set them to work.”

[The cover is made to look like a page from a trading stamp book. Each stamp is marked “ONE BORE.”The text on the page reads: “Bonnie Boredom Says: Save Boredom Stamps—You’re On The Way To Stupid Gifts For Work And Play.” –MS]

The National Geographic, By Dean Latimer and Sean Kelly; Photographs by Bruce Bacon

The I Chink, By Dean Latimer

More to Come, By Michael O’Donoghue; Illustration by Daniel Maffia

Funny Pages, Featuring “Nuts” by Gahan Wilson; “Russ de la Rocca—Worm Trainer of the Americas” by M. K. Brown; “Shab” by B. Kliban; “The Adventures of the United States Weather Bureau/Mafia Tales/VD Clinic” by Rodrigues; “In the French Restaurant” by Ed Subitsky; and “Chicken Gutz” by Randall Enos