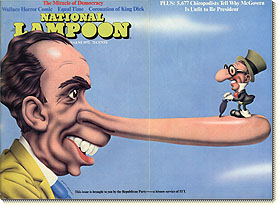 “COVER: This month’s cover is by Robert Grossman, winner of the coveted National Lampoon Political Caricature Award, consisting of a handsome stipend to permit a half hour of study in any appropriate area of the fine arts, for his immortal portrayal of Richard Nixon as Pinocchio, which (as is customary for winners of this sought-after citation) appears on the cover of ‘that magazine which most fulfills the ideals and principles symbolized by the National Lampoon.”

Tales from the South, By Michael O’Donoghue; Illustrated by Don Perlin

The Miracle of Seniority, Written and illustrated by Gahan Wilson

The Miracle of Democracy, By Doug Kenney; Illustrations by Bruce McCall

The Coronation of King Dick, By Tony Hendra and Sean Kelly; Photography by Michael Sullivan, Illustrations by Jeffery Prescott and Harry Fischman

Freedom of Choice, By Michael O’Donoghue; Illustration by Michael Gross

Tommy Tucker: A Reactionary Hero’s Glorious Challenge to the Forces of