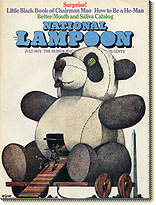 “COVER: Once again our own Art Director, Michael “Has Anybody Got an Eraser?” Gross, elbows his way into your home with this month’s cover. His last (“Is Nothing Sacred?” January, ’72) sold literally dozens after being made into a handsome wall poster. Come to think of it, his career has been looking pretty grim generally, particularly since Frederick’s of Hollywood started using photographs instead of free-lance art in their rubber-frock catalogues.

[The cover shows a giant panda near the Washington Monument. Several Chinese soldiers and a tank are emerging.]

The Way to Become the Masculine He-Man, By Chris Miller; Illustrated by Vincent Calabrese

The Abandoned Sock, Written and illustrated by Edward Gorey

The Worst Cartoons in the World, By Brian McConnachie