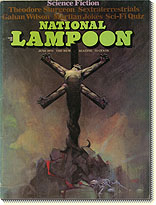 “COVER: The extraterrestrial gruesifixion is once again the work of Frank “If You Think I’m Gonna Let You Keep the Original Art When I Can Get Ten Gees a Shot for Them from Collectors You’re Outta Your Gourd” Frazetta, generally acclaimed Thing-of-the-Mountain around fantasy-illustration circles for his famous Conan the Adventurer paperback covers and his eye-splitting National Lampoon work (cover, April, 1971; ‘Dragula’ cover, November 1971). Mr Frazetta now lives deep in the Poconos, where he is confident their Xykloscopic Detectors will never find him.”

An Anthology of Next Year’s Best Science Fiction, By Brian McConnachie; Illustration by Michael Gross

An Interupted Luncheon, By Doug Kenney; Illustrated by Michael Sullivan and Bill Skursky

On the Night Before the Last Day They Filmed “Star Trek,” By Chris Miller

Sci-Fi Quiz, By Mike Olshan; Illustrated by David A. Johnson