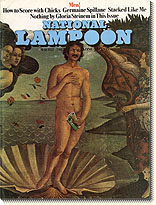 “COVER: Readers searching for the answer to the question ‘Who draws more covers for the National Lampoon than any other New-York-based illustrator working out of a brownstone on East Forty-ninth Street with the initials D.H.?’ will find a clue on the half-shell, just above the D.H. signature. Painting by Dick Hess, decoration by Sandro Botticelli. As the cover proclaims, this month’s theme is ‘Men!,’ as in ‘Hooray for men!’ or ‘Oh, men!’ Take it as you like it.” [The cover is a parody of the well-known Botticelli Venus. The figure has a copy of Playboy in his hand.]

How to Score With Chicks, By Doug Kenney; Illustration uncredited [possibly Michael Gross—MS]

How to Make it With Men, By Amy Ephron

The Rape of the Doll, Photography by Lynn Goldsmith

The Zircon as Big as the Taft, By Michael O’Donoghue; Illustrated by David Palladini

This Must Stop, By Tony Hendra; Photograph by Michael Gross

The Wide World of Ballet, By Brian McConnachie; Photographs uncredited

Stacked Like Me, By Chris Miller; Illustration by Don Ivan Punchatz

The Knowledge of Fear, Written and illustrated by John Glashan

My Gun Is Cute, By Henry Beard; Illustration by Gary Morrow