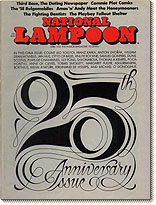 “COVER: A commemorative design by Michael Doret specially commissioned for our Pig-Iron Anniversary. The large numeral 25 symbolizes Passage of Time in the Face of Adversity; the decorative swirls represent Opportunities, Both Those Missed and Those Taken; the 75¢ denotes Money in the Bank, Taken There by People Who Laughed All the Way; and the impressive roster of names signifies the Gullibility of Man, In Spite of It All. Thanks, and a tip of the NatLampCo porkpie to architect Gamal El-Zoghby, for permitting us to film “The Playboy Fallout Shelter” in his Playboy Fallout Shelter.”

Third Base, The Dating Newspaper, By John Boni and Henry Beard; Photographs uncredited

The Cursory History of the National Lampoon, Written and illustrated by Arnold Roth

Man in Toilet, Cartoons by Rodrigues

Where Were You When Ezio Pinza Died?, By Brian McConnachie; Illustration by Eugene Mihaesco