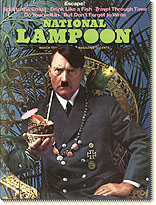 “COVER: The colorful personage featured on our cover is not stuffed or made of wax, but very much alive. His name is Loro, which is Spanich for parrot and, in Chile, means a bedpan. Photographer Leonard Soned, who is responsible for this portrait, imported Loro from mexico four yeaars ago, and his since taught it to roll over on its back to have its stomach scratched, and to survive daily lofe in a busy new York photo studio. On its own, it has learned to say ‘I’ll get it!’ when the phone rings and the opening bars of two Beatles songs.

“Also shown in this photograph is Swiss-born ex-acrobat Billy Frick, who appeared in Paramount’s Is Paris Burning? and a recent David Wolper TV special for CBS. We lured Mr. Frick to southern climes in order to fill six pages of this issue.” [Frick posed as Hitler on the cover and in “Stranger In Paradise” in this issue. Loro is the parrot standing on his shoulder.—MS]

Swan Song of the Open Road, By Sean Kelly; Illustrations by Arnold Roth

My Blue Heaven, By Anne Beatts; Illustration by Michael Gross

Last Impressions Are the Most Important, By Commander Barkfeather and Doris O. Perception [most likely pseudonyms—MS]

Stranger In Paradise, Written and photographed by Michel Choquette

The Runaway, Cartoon by R.O. Blechman

The Adventures of A Connecticut Yankee, By Michel Choquette and Sean Kelly; Illustrated by M.W. Kaluta

Drop Them a Line to Say That You’re Fine, Uncredited; Illustrations uncredited [from old postcards]