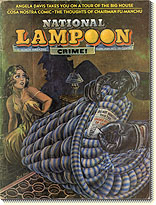 “COVER: This month’s cover is by Dick Hess, who adds to the already groaning mantelpiece in his studio atop one of Gotham’s loftiest brownstones yet another (his fifth) Hero of Capitalist Art Combination Statuette and Clothes Brush. (This handsome keepsake, executed in Sterling Steel and standing over fifteen inches high, depicts Art playing paper-scissors-rock with Progress, while Responsibility, Hope, and A Winning Personality toss quoits around the base.) Gosh, Mom, this magazine sure has a lot of art by this Hess guy. That’s right, Sally, it has Hessitosis!” [The cover shows a menacing figure unlawfully ripping the tag from a mattress.]

The Case of the Loquacious Rapist, By Tim Mayer; Illustrated and photographed[?] by Michael Sullivan

Riders of the Black Hand Comics, By Anne Beatts and Michel Choquette; Illustrated by Frank Springer

The Last Recall, By Henry Beard; Illustration by Gerry Gersten

The Audrey-Gore Legacy, Written and illustrated by Edward Gorey

The Thoughts of Chairman Fu-Manchu, By Henry Beard; Illustration by Jeff Jones

The Last sMile, Cartoons by Rodriques

Angela and Rocky Take You On a Tour of the Big House, George W. S. Trow; Photographs uncredited