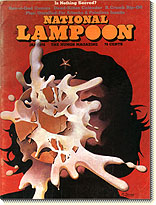 “COVER: This month’s ‘grabber’ is by Michael Gross, Art Director of the National Lampoon, or Lampoon Nationale, as it is known in the tiny town of Mal-de-Mér, France, where, as elsewhere in the fancy art-conscious European continent, mention of the name ‘Gross’ will get you les yeux morts (blank stares). After graduating with honors from Brooklyn’s prestigious Hudson River School, Michael spent an anno (worth about 4-1/2 American months) in Mexico on the Olympic Design Committee, whose startling graphics were generally credited with sparing Mexico the troublesome crowds of spectators that have spoiled so many previous Olympiads. Prior to joining the NatLamp team, Mike worked at Better Gums and Bicuspids, Bush and Shrub, and the American Journal of Institutional Food. In his spare time he raises hackles and forges Monets.” [Cover is a parody of a famous Ché Guevara poster.]

Summer of ’44, By Michael O’Donoghue and Tony Hendra; Illustration by Frank Bozzo

Buckminster Fuller’s Repair Manual for the Entire Universe, By Henry Beard, Harry Fischman, and Jeffrey Prescott [illustrations by one of the latter two]

Where Do YOU Draw the Line?, Uncredited; Illustrations by Sagebrush, Randall Enos, and others [uncredited]