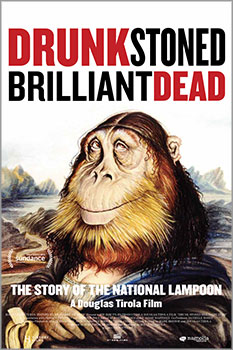 Drunk Stoned Brilliant Dead, the new documentary film about the National Lampoon, is making the festival circuits right now. At some point, you will be able to see it, but in the mean time you can download the poster, featuring Rick Meyerowitz’s iconic Mona Gorilla.

(Side note: Rick wrote a large-format book with the same title, and even the same font. The film is using it with his permission, of course. But I’m glad they also chose to use Rick’s Mona Gorilla art. I honestly can’t think of an image more associated with the magazine than that. Rick specifically chose not to use it on his book, and I respect his choice, but I’m glad they chose to use it for the film.)