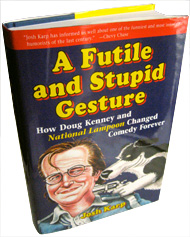 graciously agreed to an interview. This is somewhat of a departure from my usual news items, which lately have been short and infrequent. So this is a pretty big deal. But then, I think this book is a pretty big deal. If you have any interest in Doug Kenney or National Lampoon, you will love this book. In my opinion, this is one of the best, if not the best, books on National Lampoon written yet. As promised, here is the interview.

Mark: Where did you get the idea to do this book? Why did you want to do it?

Josh: When I was 14, my dad got me a job in the mailroom of the law firm that represented his company. The guy who ran the mailroom had every Lampoon ever published and brought them to work. This was 1980, right around the time Doug died and somehow I read the Esquire article about him dying [Death of a Comic Genius, by Robert Sam Anson, August 1981], and it always stuck with me. So, 23 years later, when I was looking for my first book project, I thought, I can’t believe nobody did a book about this guy, or really about Lampoon, which was really the cornerstone of much of my worldview in many ways. Or at least my sense of humor.

M: So, you weren’t reading National Lampoon back when Kenney was at the magazine?

J: Some of my friend’s older brothers read it, so I’d seen it. But when I was 12, I saw Animal House, and then when I was 14, I spent the summer in the law firm mailroom, reading every single issue of the magazine. So, no, I wasn’t a regular reader during the 1970s. In fact, my single favorite Lampoon piece at that time (other than the High School Yearbook Parody) Was Ted Mann and Tod Carroll’s “O.C. and Stiggs.” which I thought was the funniest thing in the world when I was 20.

M: I was amazed at the shear number of people you interviewed for the book. Were people reluctant or eager to talk to you?

J: Both. Lots of the people who were being interviewed only about Doug were reluctant. Many of them felt really burned by the Esquire piece and it’s depiction of Doug, so that was hard to crack. And others, for varying reasons, were not interested in talking. But many, many were really excited to talk and helped me crack some of those who didn’t want to talk. Some who initially didn’t want to talk—like Brian McConnachie—wound up being some of my favorite people and interviews.

M: I bet he was pretty interesting.

J: Brian is one of my favorite people I met from working on the book and re-reading his work in National Lampoon is so much fun. He is so brilliantly original. Nobody else thinks like him. We sat on his porch one summer day and he told me about things he’d worked on that were so insanely funny that I was exhausted when I got back in my car to leave.

M: One of my favorites of his is “Pamplemouse.”

J: I think that was his first. My favorite has to be Guns and Sandwiches, his parody magazine which is a merger between two failing magazines—one focused on the gun industry and the other about sandwiches. His concept was that they were both very bad magazines and they merged out of necessity. To reflect how poorly run they are, he has a letter to the editor that reads something like: “In your article about the sandwiches Charles Whitman brought with him to the tower in Texas [for his shooting spree] you show a picture of the actor James Whitmore. What does he have to do with this?” That, to me, is one of the funniest things ever in the magazine. Though I’m sure my retelling doesn’t do it justice.

M: I’ll have to re-read that one. That was from a time when I wasn’t reading the magazine as thoroughly.

J: Brian is just completely original. Nobody else sees the world or humor the way he does. He’s also, I believe, the only person to ever write for the Lampoon, Saturday Night Live and SCTV.

M: What was your favorite part of writing the book? Least favorite?

J: My absolute favorite thing was meeting and talking to people who’d worked at Lampoon. They were all just so smart and funny. Sean Kelly and Brian stand out, but there are others. Chris Miller, he was the first person that I’d met who worked there. And I thought “Jesus, the guy who wrote Night of the Seven Fires” and was one third of the Animal House writing team.

I also just loved learning about the inner workings of the magazine and about Doug’s life. Which also was the hard part. I truly liked everyone I spoke with and then had to write about them with complete honesty—which as time wore on became a big deal and very hard, because they weren’t all saints. Though, I’m not sure any of them view themselves as such.

So, it was tough to have to be the biographer and journalist after developing relationships with the people I was writing about. but, I think the book is a really honest reflection of who they were and what it was like to be at National Lampoon in the 1970s.

M: Yeah, I get a very vivid sense of what it was like to be there—more so than other books that have been written about people at the
magazine.

J: Thanks. I think that’s because I didn’t actually work there, so I had to do the research and create a mental image for myself, which somebody who was there doesn’t have to do. Strangely, I think it’s easier to paint the picture if you haven’t actually physically seen the image of something.

A good example of that is with Doug. Other than a few bits on the radio hour and his work as stork and a tiny, tiny scene in Caddyshack, there is
absolutely no video or audio of him. I really didn’t even know what his voice sounded like. I had to get it all from other people and put it together myself. That was a big challenge.

M: One of the things that’s unusual in the way you paint a picture of life at the Lampoon is that you talked to people who are not so well known—the “little” people, like copy editors and
assistants, etc.

J: Yeah, that was both by design and at points out of desperation and fear. I wanted to make sure I got it as completely and correctly as possible (the fear angle). At first I was worried about who would and wouldn’t speak to me so I tried to find everyone listed in the Tenth Anniversary Anthology (on the masthead) and finally, I’ve worked a lot of places and knew that the people behind the scenes are the ones who really know what’s happening.

J: They’re the people who get the front row seat to what people are like. It’s like interviewing the bat boys and locker room attendants for the Yankees of the late 1970s. They could tell you all about what Reggie Jackson or Billy Martin was really like. That was a huge help in fleshing out a lot of people like P.J. and Doug.

M: What surprised you most to learn about Doug Kenney?

J: This may sound boring, but the depth of his work and his talent is what really surprised me. As a person, I learned so much about him—some of it surprising. But what amazed me was his work. Of all the people there, he was the greatest talent and had the most uncanny ability to write really funny things that had a strong viewpoint, but carried so many elements, hidden jokes and depth, that I was just blown away.

M: Here’s a question that one of my readers wanted me to ask (he has read an advanced copy of the book already): Did you hear of any ideas that Doug Kenney had for issues, articles, movies or whatever that you think might have changed the course of National Lampoon?

J: Not that I can recall at the moment. I think that by the time Animal House was in the theaters, he was pretty much done with National Lampoon, at least as far as being an employee. So, at that point, for whatever reason, he was not still doing stuff there. But, I can think about it and see if I can recall anything else.

M: What do you think Kenney would be doing now if he were still alive?

J: A lot of people like to say stuff like, “he’d own Hollywood” and would be some huge producer or screenwriter. That might be the truth, but I suspect that somehow, he’d have gotten out of there. I’m not sure what he’d have done, but I think he really needed to find himself. I don’t think he’d have become the next Woody Allen or something like that. I think he’d have soured on the business and figured out something else to do with his talents. What, I’m not sure.

M: What has been the reaction to the book from people who knew and worked with him, some of whom no doubt have seen the book by now?

J: Michael Simmons is the only person who worked there or was around whose read it so far. Everyone else is getting their copies in late August when I get them from my publisher. And Michael loved it. He’s been very kind. He said that some parts made him cry and that I’d captured doug and the entire scene just as he remembered it, which was very nice of him. I hope others feel that way as well.

M: Do you think we will ever know what really happened on
that cliff in Hawaii?

J: I’m not sure what else there would be to find out. The police concluded it was an accident. And there are people with such varying views of what might have happened. But, in the end, the only person who knows is Doug. Though, I think the fact that there is so much question as to the nature of his death is very in keeping with his personality—kind of leaving so many possibilities open.

M: Well, that’s about all I have. One more thing: How did you get Rick Meyerwitz to do the cover?

J: Rick is a great, great guy and we became friendly during my work on the book. When it came time to find a cover artist, I thought he or Bruce McCall would be perfect. But, rick was really the person whose work was more identifiably Lampoon-ish and he very graciously agreed to do it.

M: All right. Thanks, Josh, and good luck with the book.