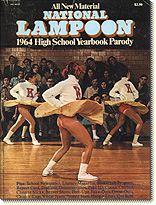 The High School Yearbook Parody was one of the most stunning achievements of National Lampoon during its heyday. It was one of the most ambitious publishing projects ever undertaken by the magazine. It consists of a nearly full-length parody of a typical high school yearbook followed by numerous documents and ephemera relating to Larry Kroger, a fictional student at C. Estes Kefauver High School, Dacron, Ohio (also fictional). A prep school on the Upper West Side of New York City was rented for several months and twenty young people were cast as the senior class. The school teachers and staff were played by NatLamp writers and staffers. The attention to detail is mind-boggling, and is really the key to what makes the whole thing so funny. The issue was a bestseller for the magazine and went into several printings through the end of the seventies.

An early, shorter version of the same idea can be seen in the October 1970 (Nostalgia) issue with the 1956 High School Yearbook, written by Doug Kenney and Michael O’Donoghue. The character “Larry Kroger” appears later as the main protagonist in Animal House (with the nickname “Pinto,” taken from Chris Miller’s Tales of the Delphian Lodge short stories). The original idea for a National Lampoon movie (which ultimately became Animal House) was set at Kefauver H.S. When Chris Miller’s stories were added to the mix, the setting was changed to a college.–MS