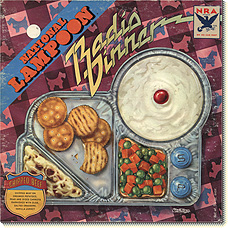 Catch It and You Keep It, Performed by Jackson Beck, Christpher Guest, Jack Marks, Jill André, Windy Craig, and others; from an idea by Benjie Aerenson
TV game show parody where audience members try to catch valuable prizes (including electric knives, dinette sets, even a house) thrown down from the top of the CBS building.

All Kidding Aside (PSA), Performed by Christopher Guest

Those Fabulous Sixties, Performed by Christopher Guest (as Bob Dylan)
Parody of a K-Tel-type television ad in which Bob Dylan hawks a collection of protest songs

When the Democrats nominate a Pontiac GTO for the ’72 Presidential election, Nixon counters by transforming himself into a car. The piece ends with America The Beautiful played on car horns.

Pull the Tregros, Performed by Diana Reed (as Joan Baez); guitar: Frani Bell; bass: Dean Munson; composed by Tony Hendra; arranged by Christopher Guest
Joan Baez parody in which she encourages blacks to riot in prisons while she cheers them on from a safe distance

Concert in Bangla Desh, Performed by Tony Hendra and Christopher Guest
George Harrison’s Concert for Bangla Desh is given the old switcheroo: an Indian “tragedy team” tells sad jokes before a starving audience in Bangla Desh for the purpose of collecting a bowl of brown rice for George Harrison so he can fast

Clues #1, #2, #3, and #4, Performed by Tony Hendra and Christopher Guest (not listed–scattered throughout the album)
These are short bits not listed anywhere on the album which refer to Paul McCartney and his support for the Irish independence movement. In several of the bits, we hear an Irish tenor in a pub starting to sing “Give Ireland back to the Irish…” cut short by a gun shot.